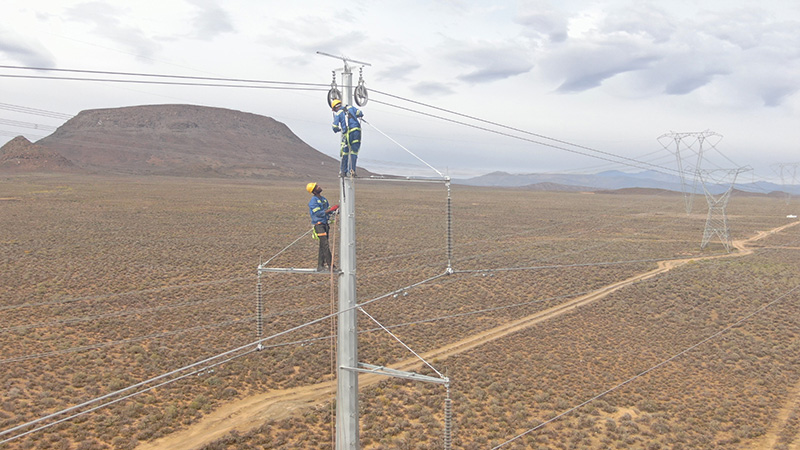 2020 promises to be an exciting year for Perdekraal East Wind Farm as it heads into its final six months of construction.   The last of the 480 wind turbine components will reach the wind farm’s construction site early February 2020 and all 48 turbines are expected to be installed by early April 2020.

“Our commercial operations date is confirmed for end-July 2020, so we are on the home run, from the time our site re-opens on 13 January.  In addition to receiving the last components on site and the 48th turbine lifting, we will have completed the extension of the existing 400kV yard and construction of a new 132kV yard at the main transmission substation, Kappa, which we will be undertaking ourselves, as opposed to Eskom,” explained Glenn Hobson, Construction Project Manager for Perdekraal East Wind Farm.
A new 500MVA main power transformer will be installed during April 2020, with plans to energise the plant by 26 April.  “Our construction team chose to construct, test and commission the works under a self-build agreement, based on the need for a compressed construction schedule and full control of all contractors, in order to minimise the timeframes and ensure that the project can achieve commercial operations on schedule,” added Hobson.
Perdekraal East Wind Farm commenced construction during July 2018.  16 months later the wind farm is reported to be on time and on budget, having lifted almost 40 % of the 48 turbines and installed the main power transformer at the Distribution Substation.
Additionally, all civil works have been completed and over 80% of turbine components have been delivered to site outside of Ceres, travelling from Atlantis and Saldahna on the West Coast.
Construction halts on 13 December 2019 and commences again a month later for the final construction stretch, leading up to COD, which is scheduled for end-July 2020.
When complete, Perdekraal East Wind Farm, situated within the Witzenberg Local Municipality, will be the Western Cape’s largest BW4 wind farm.