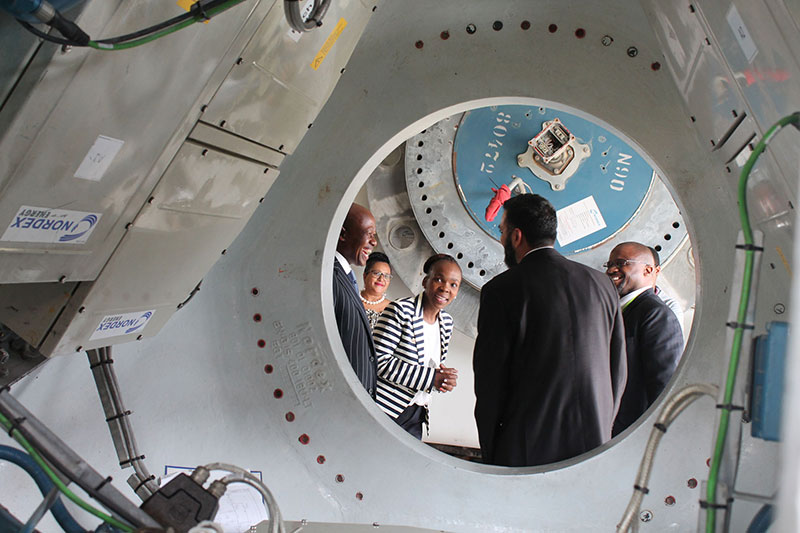 The South African Renewable Energy Training Centre (Saretec) based at CPUT is uniquely placed to fulfil the need for quality training in the growing renewable energy sector. This sentiment was underscored by speaker after speaker at the launch of Saretec this week. Renewable energy industry specialists, government officials and CPUT academics gathered at the Bellville campus to celebrate the official launch although the centre has been operational since 2016.
The only one of its kind in Africa, Saretec trains Wind Turbine Service Technicians and Solar Photovoltaic (PV) Technicians and is also mandated to train technicians in Energy Efficiency and Biomass/Biogas. Since the beginning of 2016 they have trained 80 Wind Turbine Technicians and more than 200 Solar PV related trainees.
Western Province Premier Helen Zille stressed the importance of public/private, government/business and academic/ industry partnerships that allow young people to become productive members of society: “This launch represents all of that,” she said.
Agriculture production, tourism and the energy sectors have been earmarked by the Western Province government as industries which could absorb the greatest number of unemployed youth but the third sector needs skilled labour. While skills development programmes provide much needed funds, the energy sector needs are highly specialised.
“Everybody working together has resulted in Moody’s (credit rating agency) saying that this province has the fastest growing green economy in the world. Saretec is a critical link in building that value chain,” said Zille.
Director General of the Department of Higher Education and Training Gwebs Qondo said they had, through the National Skills Fund, made R105 million available to establish and equip Saretec, which included R24 million for operational fees for three years.
“We are pleased that Saretec has come to fruition and is now supplying the much-needed specialised skills for the growing renewable energy industry in South Africa,” said Qondo.
He pointed out that the learning made possible through the technology available at Saretec has been made accessible beyond Cape Town.
“Saretec now offers formal occupational qualifications in the areas of wind energy and solar energy. Plans are going forward to expand into other areas of renewable energy. We waste our waste and this compounds the problem of environmental degradation. Landfills are overflowing and our oceans are becoming more polluted. There is a natural intersection between renewable energy and waste management. Are we exploring this sufficiently?” asked Qondo.
Saretec Director Naim Rassool added that the official launch acknowledged the significant investment made by the Department of Higher Education and Training into skills training. He also recognised the role of non-profit organisation GreenCape which drives the adoption of economically viable green solutions in the province and German development agency GIZ which was instrumental in helping develop Saretec’s training material. Rassool also singled out the Manufacturing, Engineering and Related Services Sector Education Training Authority (Merseta), the Department of Energy and the South African National Energy Development Institute for their consistent support. Nordex, a European manufacturer of wind turbines was also given special mention for supporting Saretec through their life size models used in training simulations.
Ends
Visit the Saretec website here https://www.saretec.org.za/ for more information about the centre and training programmes.