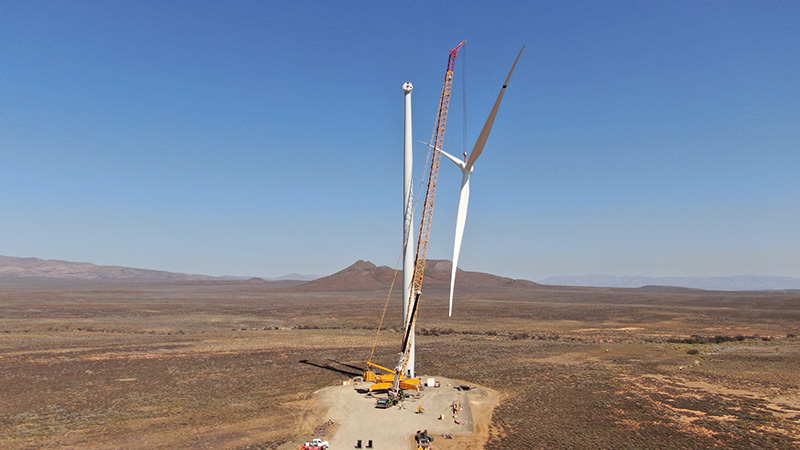 Perdekraal East Wind Farm celebrated the erection of its first wind turbine, a pivotal point in the construction process and one that has been successfully undertaken by a South African dominant team. 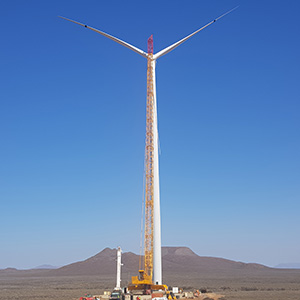 “We are very proud that both specialist crane operators are South Africans, an indication that our industry is maturing and that skills are being effectively transferred. The first 100% local South African turbine lifting team featured during the latter part of Khobab Wind Farm’s construction in 2017, whereas prior to that we were required to import this expert skill,” explained Christo Loots, Construction Programme Manager for Perdekraal East Wind Farm.
Local employment accounts for the majority of the workforce, with about 150 employees being employed from the local communities of Ceres, Nduli, Bella Vista and Prince Alfred Hamlet.
The turbine assembly takes roughly a day to complete, assuming that the weather is favourable, with the front runner crane installing the first 2 tower sections as well as the rotor assembly, which is referred to as the pre-erection phase.  The main erection, which includes the installation of the remaining three tower sections, nacelle and rotor takes anything between six and seven hours, which is in addition to the pre-erection process that typically takes around five hours to complete.
The construction of this Western Cape mega-wind farm project is on schedule and on budget.  In addition to the first turbine lifting an additional six pre-erection turbines are completed.
The wind turbines stand 115m tall to allow for optimum energy production, however, when one of the blades stand vertically, the turbine’s tip height is an impressive 168m high. The three 53,2m blades, made from fibreglass reinforced epoxy, are connected to the rotor at ground level before being lifted to the top of the turbine tower. The heaviest component is the nacelle, which contains the generator and gearbox; and weighs 86 tonnes.
The next major construction milestone will be the arrival of the main transformer and the energisation of the substation.
“We are extremely pleased to be on schedule and on budget,” concluded Loots.
This 110MW wind farm spans 3 055 hectares and will generate enough clean electricity to power up to 95 000 South African homes. In addition to zero carbon emissions and reduced use of fossil fuels, the country will benefit from almost zero water consumption that is required during the generation process of Perdekraal East Wind Farm.