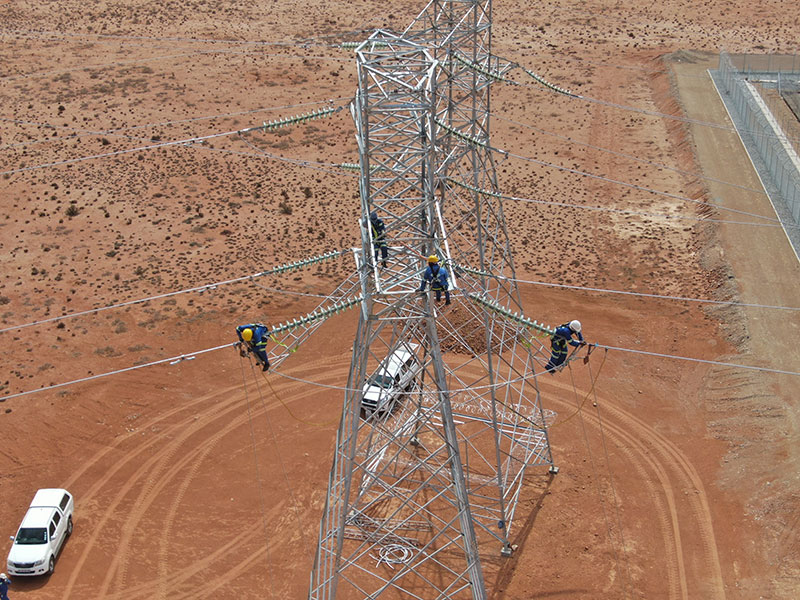 Kangnas Wind Farm commenced the construction on the Groeipunt Transmission Substation in June this year.  This is the first time that an Independent Power Producer in South Africa has taken on the responsibility of a greenfield self-build Transmission substation, which would normally fall to Eskom to build.  Once complete the substation, which will enable the Kangnas Windfarm to have grid connection on the Eskom 220kV network, will be handed over to the national utility.
“This is a huge project allocated by Eskom TX to a developer, as an entire self-build from greenfield construction to fully commissioned substation,” explained Manie Kotze, Construction Project Manager for Kangnas Wind Farm.
The Groeipunt Transmission (TX) Substation located 50km from Springbok on the N14 towards Aggeneys, is already 80% complete.  It is expected that it will be ready for handover during March 2020. Eskom has allocated a representative on site, to inspect and evaluate milestones and holding points.
Kangnas Wind Farm commenced construction during June 2018.  19 months later the wind farm is reported to be on time and on budget, having lifted over 52% of the 61 turbines. Additionally, all civil works have been completed and 80% of turbine components have been delivered to site outside of Springbok, travelling from Atlantis and Saldanha on the West Coast, with all 610 components expected to be on site by the end of February 2020.
The next step in the process is the handover of the 160MVA transformer, scheduled for end-January 2020, followed by the 250MVA transformer scheduled for late February 2020.
“Once the two major transformers are installed and all Pad Mount transformers are in place, commissioning and testing will commence on completed circuits while the final erection of turbines will continue in remaining circuits, followed by GRID Code compliance testing,” explained Kotze.
Construction halts on 13 December 2019 and commences again a month later for the final construction stretch, leading up to commercial operations, which is scheduled for late August 2020.