KANGNAS WIND FARM CELEBRATES ALL TURBINES IN PLACE AHEAD OF SCHEDULE 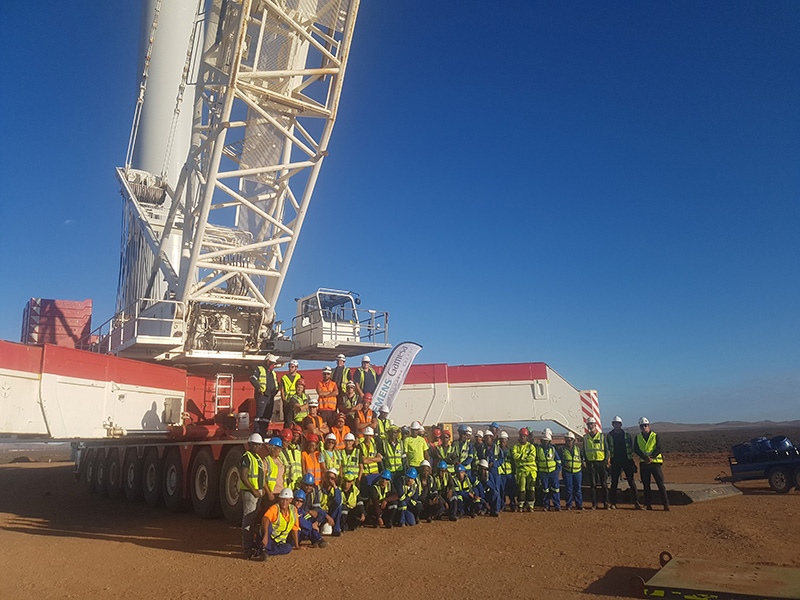 KANGNAS WIND FARM CELEBRATES ALL TURBINES IN PLACE AHEAD OF SCHEDULE

18 March 2020
Kangnas Wind Farm has announced the completion of all 61 wind turbine installations, two weeks ahead of schedule, on 17 March 2020. Furthermore, the project is proud to confirm that the 45-member crew that took on this large-scale lifting programme, are mostly local South African’s from the Northern Cape Province.
With all turbines now installed, the project is swiftly moving along to its Commercial Operations Date, later this year.
“87% of the lifting team are South African, with just six being ex-pats. The team began the erection of the first of its 61 wind turbines in July last year and worked very hard to take advantage of the periods of low wind to install all the turbines, in just eight months and ahead of schedule,” explained Manie Kotze, Construction Project Manager of Kangnas Wind Farm.
Kangnas Wind Farm commenced construction during June 2018 and just 21 months later the wind farm is reported to be on time and on budget, having lifted all 61 turbines, a major milestone for the construction team, including the local workforce who make up the lion share of the team.
The next step in the process is the handover of the two Main Power Transformers, which are schedule over short-term.
“Once the two power transformers are installed and energised, commissioning and testing will commence on the wind turbines, followed by GRID Code compliance testing,” explained Kotze.
140MW Kangnas Wind Farm will have the capacity to generate 563,5 GWh/year of clean, renewable power into South Africa’s national power grid. This is equivalent to the energy needs of 120 000 homes, each year.
This renewable power plant will also help the country reduce its greenhouse carbon emissions, eliminating approximately 550,000 tonnes of carbon emissions each year when compared to traditional fossil fuel power plants. In addition to zero carbon emissions and reduced use of fossil fuels, the country will benefit from almost zero water consumption that is required during the generation process.
Further information is available on the Kangnas Wind Farm website: https://kangnaswind.co.za