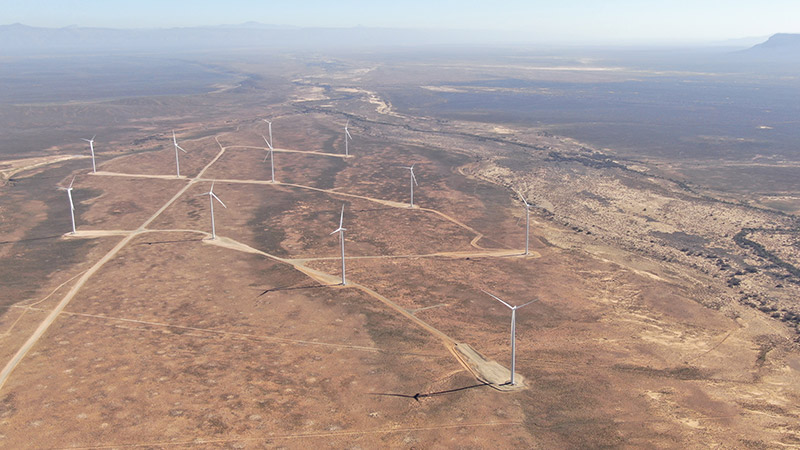 1 October 2020
Almost two years after construction commenced on Perdekraal East Wind Farm, in the Western Cape’s Witzenberg Municipality, this project has completed its Grid Code Tests, the final milestone before achieving its Commercial Operations Date (COD), which is earmarked for the coming weeks.
“We are pleased to be heading into the last phase of this wind farm’s construction and can already visualise COD, which we expect to achieve in the next two to four weeks,” said Glenn Hobson, Construction Project Manager for Perdekraal Wind Farm.
Before a wind farm can be connected to the country’s national energy grid for commercial operations it must be tested to certify that it complies with both performance requirements and the grid code. In order to do this, a sufficient steady wind is required to carry out a full test of the performance and compliance of the wind farm to the grid code under representative conditions.
“During the grid code testing period, the project team verify the response of the wind farm in accordance with the latest grid code, considering the local wind and grid conditions, which ultimately demonstrates compliance,” said Hobson, who outlined that once the wind farm has received acceptance of the test results, it will be permitted to attain its license to generate electricity.
Perdekraal East Wind Farm is one of the country’s twelve wind farms that went into lockdown in March this year, during its construction phase. Activity resumed on site during late May, having cost the team over 50 days of work.
CONCO is responsible for the electrical component of the balance of plant works, including the engineering, procurement and construction, as well as the electrical works for Perdekraal East Wind Farm.