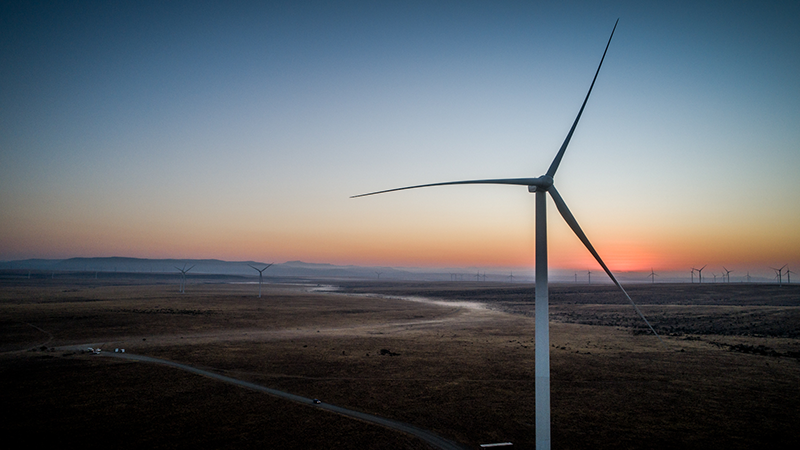 Golden Valley Wind Energy Facility is South Africa’s latest wind farm to connect to the country’s national grid.  As part of the government’s most recent Renewable Energy Independent Power Producer Procurement (REIPPP) programme bid round, which is set to collectively add 1.3 GW of new wind power capacity, this BioTherm Energy project is helping the country to successfully transition to a greener energy economy whilst increasing the Energy Availability Factor.
“We are pleased to announce the successful commissioning of all forty-eight wind turbine generators as the year draws to an end and we prepare to have our portfolio in operations in the next quarter,” said Robert Skjodt, CEO of BioTherm Energy, which has developed a pipeline of 384MW wind and solar projects in South Africa and Kenya.
The 120MW Golden Valley Wind Energy Facility, in the Eastern Cape, achieved this key milestone on Tuesday this week, ahead of its expected Commercial Operations scheduled for the first quarter of next year (Q1, 2021).  The plant additionally celebrated a million hours without a lost-time-incident (LTI), during the construction period.
This Independent Power Producer (IPP) is expected to generate over 477GWh of renewable power each year, equivalent to the energy needs of approximately 120 000 households, and has been constructed by a team comprising 98% South Africans.
Located  approximately 5km from Cookhouse, on 9000 hectares of farm land, this wind farm is connected to the grid through an on-site substation and a dedicated 132 kV power line connecting to the Kopleegte substation.
BioTherm Energy, which is wholly owned by Actis, the world’s leading emerging markets investor, has a portfolio of five projects in Africa. These include Aggeneys Solar, Konkoonsies II Solar, Excelsior Wind Energy Facility and Golden Valley Wind Energy Facility under the REIPPPP and the Kipeto Wind project, which is under construction in Kenya.