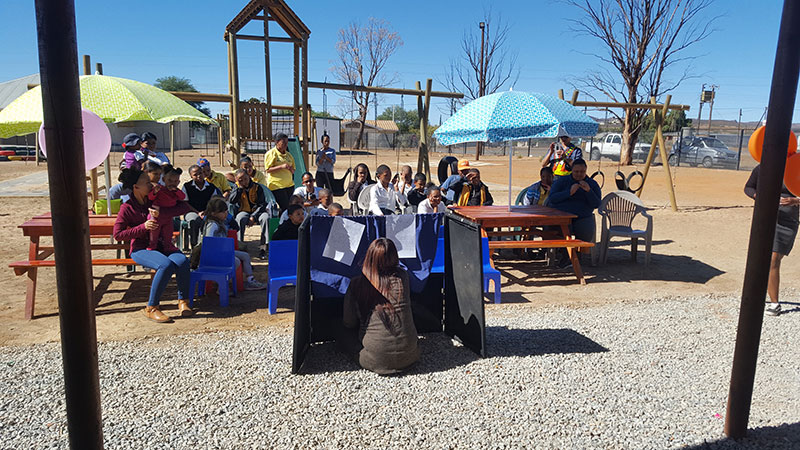 In the lead up to National Child Projection Week, 28 to 4 June, a three day children and youth awareness project on domestic violence, was recently held by the South African National Council on Alcoholism and Drug Dependence (SANCA), in Loeriesfontein.  The sessions focused on helping children affected by domestic upheaval, better identify, understand and share their troubled emotions.
The POPPETS (Programme Of Primary Prevention: Education Through Stories) Programme was used to deliver these sessions to children as young as three, whilst other sessions were targeted at children between Grade 1 and Grade 7. POPPETS is based on the premise that preventing the problems of substance abuse can never start too early and that the pre-school years are a crucial period for the development of a healthy, well-balanced personality. The intervention also draws on storytelling to create awareness and educate young children.
“We will be observing National Child Protection Week this month and remain acutely aware of the issue of child protection and the role that the SANCA programme plays to help children grow up to their fullest potential,” explained Vanessa Fredericks, Economic Development Manager for Loeriesfontein Wind Farm and Khobab Wind Farm, funders of SANCA, in Loeriesfontein.
SANCA is making headways in the town of Loeriesfontein, implementing a range of interventions and counselling programmes, designed to support both substance abuse victims and their immediate families, as well as outreach and prevention programmes at local schools and organisations, referral of patients to rehabilitation centres, and the provision of after-care services to rehabilitated patients.
Having entered into a funding agreement with Loeriesfontein Wind Farm and Khobab Wind Farm in 2017, the overall objective of the programme is to establish an autonomous SANCA organization with its own NPO number and governing body, which is affiliated to SANCA National.
“The SANCA programmes in Loeriesfontein implement a more generic approach to community development, instead of exclusive focus on substance abuse, the aim was to broaden the role of the programme and to better align it with the social needs in the community,” added Fredericks.
SANCA works in consultation with the Department of Health, SAPS, Community Policing Forums, Department of Social Development, Department of Education and Local NGO’s to improve integrated service delivery and impact.

National Child Protection Week (CPW) is observed in South Africa annually to raise awareness of the rights of children. South Africa has drafted legislation, based on the United Convention of the Rights of the Child, the African Charter on the Rights and Welfare of the Child and the Constitution.