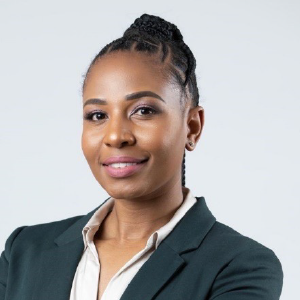 As the Head of Commercial Office, her responsibilities include identifying and originating new business opportunities. This entails scouting, origination, structuring and pricing of long-term PPAs (Power Purchase Agreements) for new renewable energy within different geographies for commercial and industrial, off-taker and non-traditional off-takers, as well as ensuring the business enjoys organic growth year-on-year. In addition to her current role, she serves as a board member for the EGP South African Project Portfolio and recently appointment as a board member of the South African Wind Energy Association (SAWEA).

Her journey in the renewable energy sector started when she left her role as Relationship Manager at FNB and joined Simacel Energy Holdings as a Developer and later moved to Scatec Solar as Senior Socio-Economic Development Manager.

Nontokozo’s has completed the EGP’s School of Business Development course, a customised two-year program from Bocconi School of Management in Milan, Italy. She holds a bachelor’s degree in management leadership (strategic management) from the University of the Free State, a post-graduate diploma in business management from Regenesys Business School and is currently pursuing an MBA.