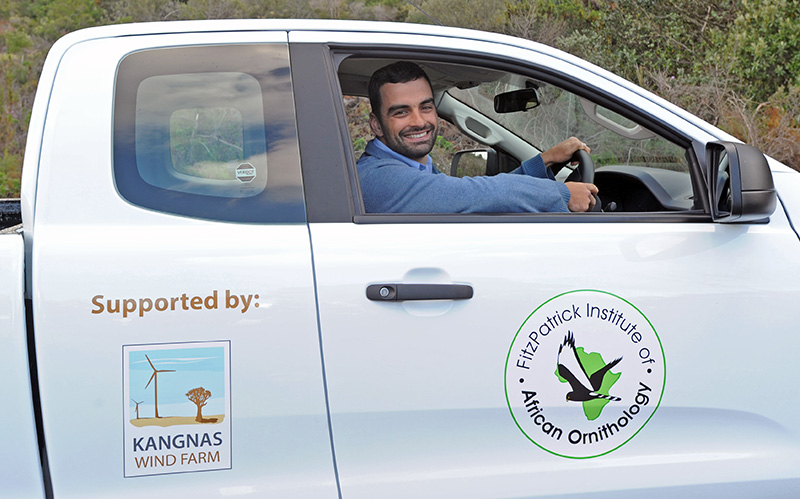 Kangnas Wind Farm has committed to supporting the FitzPatrick Institute of African Ornithology’s Red Lark research by funding a PhD study on this species.
Kangnas Wind Farm and the Fitzpatrick Institute of African Ornithology, are working in partnership to gather data related to the Red Lark species current status, its occurrence, habitat preferences and threats.  As an endemic species, Red Lark are one of the only species solely confined to the Northern Cape Province of South Africa. Furthermore, the species is currently listed as globally Vulnerable under the IUCN Red List of Threatened Species. For this reason, the wind farm and institute are collaborating to conserve, protect and better understand the species, particularly in light of the potential expansion of renewable energy facilities within the species’ range.
“We currently have a very limited understanding related to the quantity and status of habitat available, as well as the population size of this species within South Africa. Furthermore, there is little consensus or confidence in the projected impacted of renewable energy facilities on the species, so this collective effort will help both our research and the renewable energy sector to better understand any possible impact and help us to identify if any safeguards are necessary,” explained Robin Colyn, BirdLife South Africa KEM-JV Fellow of Conservation, who will be heading the study.
The greatest threat to bird species, is without doubt climate change, something that renewable energy could help off-set.  Climate change models predict that temperatures will increase and rainfall will decrease sharply in arid areas such as Bushmanland. Droughts are expected to become more severe. The associated changes in vegetation, food availability, habitat, predators, parasites and diseases may have marked effects on range-restricted, habitat-specific, resident species such as Red Lark (Dean 1993, Simmons et al. 2004).
“Studies like this, conducted by BirdLife South Africa, along with other reputable research, contributes to the environmentally sustainable development of the wind energy in the country and will facilitate the compilation of species conservation plans and mitigating actions, should it be required,” explained Reyburn Hendricks, Director of H1 Holdings, shareholder in Kangnas Wind Farm.
The study will produce a number of valuable outputs including an up-to-date distribution map and population estimate for Red Lark; a map identifying priority areas for active conservation management; recommendations for optimal habitat management to benefit the species; and peer reviewed scientific papers describing the likely effects of wind and solar energy on the species, including potential cumulative impacts of different development scenarios.
“The areas surrounding the wind farm will provide optimal sites for field studies, whilst the wind farm itself could also provide further insight into the potential relationship exhibited between Red Lark and renewable energy development,” concluded Colyn.