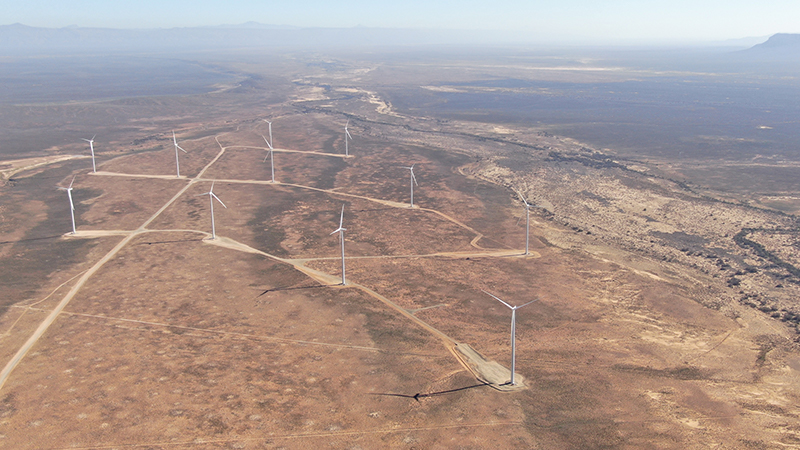 The 110MW Perdekraal East Wind Farm, outside of the Western Cape’s picturesque town of Ceres, commenced its 20-year Commercial Operations period (8 October 2020). This mega-utility scale wind farm is set to make an impact on South Africa’s national grid, whilst continuing to grow the social resilience of the surrounding Witzenberg communities.
In line with the renewable energy sector trend, which is working to meet the Department of Energy’s local content requirements, the wind farm achieved very high local content levels, exceeding 48%.  This includes both locally manufactured turbine towers as well as the project’s mega transformer, helping to drive the demand for local manufacturers to offer items previously only available through import.
Local employment was also a vital aspect of the construction programme, alongside skills training, with the majority of the project’s construction workforce coming from the local communities of Ceres, Nduli, Bella Vista and Prince Alfred Hamlet.
Local Ward Councillor, Dirk Swart, commented on the impact of local employment, in addition to other benefits derived by local communities during construction, saying, “As well as large numbers of local employment, many NGO’s have received extensive support, especially for COVID-19 relief programmes. In addition, an Early Childhood Development facility that has been built, in partnership with Bread Africa, to provide extra classrooms that can accommodate children with special needs.”
The industry has matured to the extent that expert skills that were previously brought in, such as specialist crane operators, are now South Africans, which demonstrates that skills are being effectively transferred.
Other sectors that benefited, in addition to construction and manufacturing, was the logistics and transportation industry, which managed the delivery of 480 wind turbine components from the West Coast’s Port of Saldanha and Atlantis, to the project’s site.
“As we enter this new phase, we are pleased to note that employment opportunities, skills development, socio-economic development and enterprise development are just some of the ways local communities will benefit during the wind farm’s commencing 20-year operational period,” said Christo Loots, Construction Programme Manager, for Perdekraal East Wind Farm.
Perdekraal East Wind Farm began construction in July 2018 and is now ready to begin generating an estimate 368.8 GWh/year into the grid, despite this not being a typical new-build, having halted the construction for an extended period, due to the COVID-19 lockdown.
Whilst generating enough clean electricity to power over 111 000 average South African homes, the wind farm will, just as importantly, emit zero carbon emissions and reduce the use of fossil fuels in addition to the region benefitting from almost zero water consumption during the power generation process.
Perdekraal East Wind Farm forms part of the South African Government’s Renewable Energy Independent Power Producer Procurement Programme (REI4P) and was constructed by Siemens, Concor and Conco Consortium. 2.8% of the wind farm’s revenue will be spent on socio economic development and 0.2% on enterprise development, over a 20-year period, from the time of operations.
“South Africa’s renewables story is truly inspirational. We are transitioning towards a renewable future, which facilitates multiple opportunities for growth and development, within areas and communities that for decades have lacked infrastructure, investment and sustainable employment opportunities. It’s also a chance to work towards solving one of the most pressing challenges of our time; reducing the use of fossil fuels and the associated reduction of greenhouse gas emissions,” concluded Glenn Hobson, Construction Project Manager for Perdekraal Wind Farm.
Perdekraal East Wind Farm is owned by a number of equity member; these include: